The ice is crushing and crunching under my feet, as my spiked winter running shoes keep me glued to the ground. They didn’t offer the most comfortable run but compared to the alternative of wearing a helmet to protect me from the inevitable outcome of running in slippery conditions like these; the spikes win out by a margin.

The calendar shows November 12th, 2017, and in Norway, it’s father’s day. The first since I became a father. The day also marks five months and a day since my little girl was born. Ice crunches under my feet still, and I slip a bit on account of the uneven surface. I keep my balance, no harm done, and I stride on, thinking about that day, five months and a day ago.

I ran that day, too. 21 097 and a half meters or so, and the run lasted a little over an hour and 38 minutes. It wasn’t a race, but it’s not something you quickly forget, what you ran the day your first child was born. Of lesser significance is the fact that it was the first time I ran the half marathon distance in under 1 hour and 40 minutes, which was the goal I set for myself at the start of the year. What times can I post in my race in September, I thought after completing the run on the day my daughter was born.

After that, I didn’t think about running for a week. My daughter was born on a Sunday, a month before we expected her arrival, and the next Saturday she left this world again while in the arms of her parents. The ice continues to crackle below my feet, and I feel tired. But not from running. It is father’s day, and I think about my little girl as I look towards the sun, high in the blue sky. It wasn’t supposed to end up like this, but what can you do? I don’t know, so I just run.

About halfway through the run, I stop to take a gel. While the temperature is hovering around the freezing point, the back of my jacket is wet from sweat below the vest I’m wearing to bring along my water, phone, and of course the gel. My stomach has been a challenge through many runs, but as I am going to complete a marathon at some point in the not too distant future, I need to practice consuming nutrition while running.

On the day the doctors informed us that there was nothing they could do for our little girl, my mother asked me if I thought I would continue to run after all this had reached an end. We were driving home from the hospital, for a quick shower and a change of clothes before going back to spend the night with the little one, and I remember that the question stumped me at first. At that point, I couldn’t imagine ever again having the energy to run, so after thinking about it for a little while, I only answered no.

The gel is supposed to taste like a combination of strawberry and banana, and to my surprise, it’s not too bad. I drink some water to wash down as much of the gel as possible, before putting my gloves back on and picking up the pace again. Here, the sun has melted away most of the ice from the sidewalk, and the feeling of spikes on asphalt sends shivers up through my feet and into the rest of my body. I try to stay just on the outside of the sidewalk, where it’s mostly dirt and gravel. 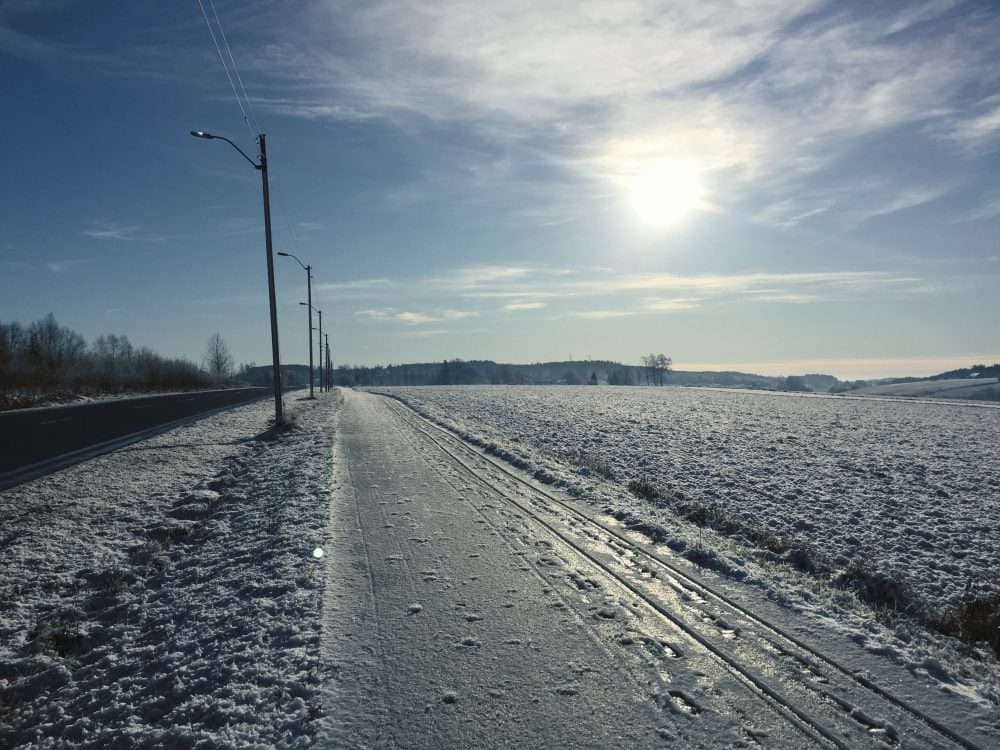 When the thought struck me at first, I felt guilty for the answer I had given my mom. How could I possibly even contemplate letting my little girl’s short life be an excuse for not accomplishing something I had said I would. Everything I did, and continue to do, from the day I first got to hold her, has been and will be for her. But this, this one thing that I had somehow thought I wouldn’t do because of her, became something I had to do for her. So now I train for the marathon because I have to do it. I have to do it for her.

These little hills are hard, and the combination of ice and spikes is getting to my legs. They feel heavy as I come up to the cemetery where we laid our baby to rest a few months back. “I’ll see you in a bit, little one” I whisper as I turn and run perpendicularly to the graveyard. It is my first father’s day, and I am going to spend it lighting a candle at my daughter’s grave. It wasn’t supposed to turn out this way, but what can you do? I don’t know, so I just run.

Just a couple of miles to go, and the sun has thoroughly imposed itself on the world now. I’m sweating, and try to stay hydrated by practising my ability to do two things at once by drinking and running at the same time. It goes moderately well, I think to myself as the little cap of my soft bottle slaps my cheek.

Some runs are hard, while others, like my night run two days back, are brutal. While all days are hard these days, it had been a particularly unsettling week. You get used to feeling down, sad and despondent, but this week everything felt a little crooked, a little out of place. Going for a medium long run in the pouring rain felt like the last thing I wanted to do, but what else was I going to do? So I ran, of course.

A short climb and downhill to go before I today’s session is over. The wind, cold and gentle, is blowing on my face, cooling my entire body, which is warm from the running. Ask me to describe the perfect day, and I will answer something like this: The world is bright white and covered in snow, the sun is shining on the blue sky, and I am outside right there in the middle of it. Running, skiing or sledging, it doesn’t matter, as long as my cheeks are red by the time I get inside to warm up again.

Before I passed two kilometres on the run two days back, a car had splashed me, and I was soaked through and cold to the bone. But as the rain turned to sleet, the temperature sunk and the wind picked up, it went from cold to freezing. Running is usually a break from feeling anything much at all, but here I found myself not just freezing, but feeling as broken and malfunctioning physically as I have done mentally for almost five months. I can’t take this, I thought, I can’t go on unless someone saves me.

On the final downhill, as I approach our house, I can see across the fields and the top of the church tower where my little girl rests. As I let my feet go, my shoes still keeping me glued to the road, I think about what a great day this was for a run. A layer of snow covers the world around me, and my cheeks are red as I’m in finishing up the final hundred meters or so. I needed saving, and someone gave me a perfect day. It’s father’s day, and it was never meant to be like this. But I know that someone’s looking out for me while I run for her.

If you liked this story, you should watch Breathe: One Man’s Journey, which is available in full for free on Youtube. Watching this documentary inspired me to share my experiences. And if you want to read more, check out the race report from the marathon I was training for during my father’s day run.

Lars-Christian is the founder of Run161. He characterises himself as a student of the sport who is always looking to learn more.